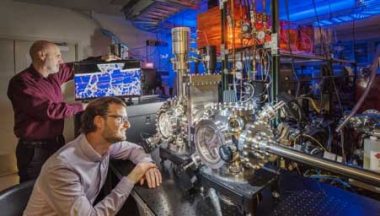 American engineers from Sandia National Laboratories claim to have succeeded in creating the toughest metal alloy that is a hundred times more durable than the strongest steel. The well-known combination of platinum and gold, but made in a new way, was the first alloy that is comparable in its properties to diamond.
Interestingly, experiments with platinum and gold have been conducted before, but so far such alloys have not been tested for strength with sufficient care. The fact that the traditional view of the resistance of the material to wear depends on its hardness, and this combination of metals can not boast this indicator.
However, in the new work John Curry and his colleagues have developed a fundamentally new approach. They created an alloy containing the usual 90% of platinum and 10% of gold, which reacts in a certain way to heat, allowing it for a long time without deforming under friction. This was achieved by changing the energy of the grain boundaries of the material (this process is associated with a change in the properties, composition and structure of the surface layers of the atoms).
The specialists used computer modeling to study the possible microstructure at the level of individual atoms with different combinations of the starting materials. Based on this analysis, they selected temperature-resistant alloys for real-world testing.
During the tests another surprising feature of the new material came to light. During friction on its surface a black film formed by itself, which turned out to be a diamond-like modification of carbon. Such an artificial coating, as smooth as graphite and as hard as diamond, usually acts as a very effective lubricant, but complex high-temperature vacuum chambers are used for its production. Thus, this spontaneous emergence of a lubricant not only extends the life of the material, but can also be an alternative way of producing it.