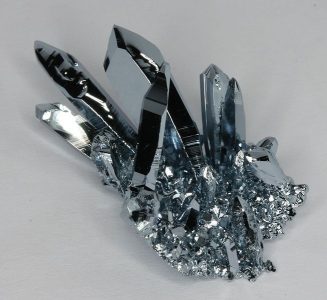 Palladium (Latin Palladium, Pd; reads “palladium”) is a chemical element with atomic number 46, atomic mass 106.42. The element was named after one of the largest asteroids, Palladium. The metal was named after an important astronomical discovery: two years before palladium was found in the solar system, an asteroid was discovered that, according to tradition, was named after the ancient Greek goddess (this time Athena Pallada). The new element was named after the mythical carved image of Athena that fell from heaven and gave invincibility to Troy.
Palladium deposits on the planet can be counted on one hand. Russia owns 41% of the world’s output, South Africa comes second (38%), while the United States and Canada bring only 6% and 9%, respectively. Palladium rose in popularity in 1988, when it was first used for manufacturing car neutralizers. Today, palladium actively replaces more expensive platinum on the car market.
Palladium began to be looked at as an investment instrument only in 2011. An American mutual fund ETF Securities pioneered the market. In 2012, 10% of all jewelry was made of palladium. This metal is used in creating diamond frames and producing white gold. In addition to standard palladium alloys, the jewelry industry sometimes uses decorative palladium compounds with indium, which form a wide range of colors from gold to lilac. But so far, they are very rare.
Carbon monoxide CO is called carbon monoxide for a reason. This poison is doubly dangerous, as it is colourless, tasteless and odourless. You can determine the presence of CO in the air with a piece of paper moistened with palladium chloride solution. It is a reliable alarm device; as soon as the CO content in the air exceeds the permissible level (0.02 mg/l), the paper turns black – PdCl2 is reduced to palladium niello.
Addition of palladium (up to 1%) also increases chemical resistance of some stainless and high chrome steels. The only widely known methods are the ones that have not been used for as long as thirty years.
Palladium gold found in Brazil does not differ in appearance from pure gold. Nevertheless, palladium proper in the compound is between 8 and 11 percent. However, when the ratio of gold to palladium is increased to six to one, the alloy turns white. Three to eight grams per ton is the content of palladium in meteoritic matter.There is more palladium in metallic meteorites than in rock ones. Palladium is a precious metal and is traded on exchange and over-the-counter markets.
There are 18 electrons in the outer orbit of the palladium atom. Palladium is an element that can enhance the anti-corrosive properties of even a metal as resistant to corrosive environments as titanium. Its addition of only 1% increases the resistance of titanium to sulfuric and hydrochloric acids.
Palladium is Pd with atomic number 46 and an atomic weight of 106.42. This noble metal kills and slows down the growth of cancer cells no worse than platinum, but it is almost ten times less toxic. Antitumor preparations based on palladium are undergoing the latest clinical tests and soon they can be used by oncologists.
The food industry also uses palladium. After it became known in some countries that nickel caused allergy among the population, many people blamed cookware made of this material. Scientists were able to solve this problem thanks to the development of new technologies. They managed to create a catalyst based on palladium, coated with aluminum oxide. This implementation allows to solve several problems at once: palladium is inert and harmless for people, besides it is many times more effective than nickel, i.e. it is needed thousands times less.
It is known that palladium is often used by jewelers in alloys with other noble metals. Thus alloys of 583 and 750 called white gold may contain from ten percent of palladium and more. In Russia, the government has officially established palladium grades 500 and 850. These samples are the most common in jewelry. It is connected with the fact that this hallmark metal is used for engagement rings as an alternative to white gold rings with rhodium-plated coating. Palladium rings have exactly the same appearance as the gold-plated ones but they don’t need to be refreshed every year.