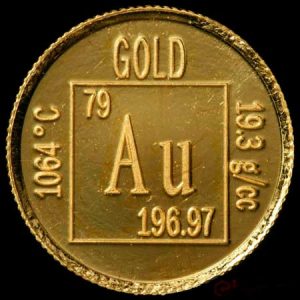 If all of the existing gold in the world was pulled into a 5 micron thick wire, it could wrap around the world 11.2 million times.

The boiling point of gold is 2808 degrees centigrade.

There are just over 31 grams in a troy ounce of gold.

It is rarer to find a one ounce nugget of gold than a five carat diamond.

The temperature of the human body is 37 degrees centigrade. Gold’s conductivity of heat means that it rapidly reaches body temperature – one of the reasons it has become valued for jewellery.

Around 187,200 tonnes of gold has been mined since the beginning of civilisation.

All of the gold ever mined would fit into a crate of 21 metres cubed.

Around half of all gold mined today is made into jewellery, which remains the single largest use for gold.

The 40,000 miners who joined the California Gold Rush in 1849 were called “49ers”. Only a very small number of them ever got rich.

Julius Caesar gave 200 gold coins to each of his soldiers from the spoils of war in defeating Gaul.

Over 90 per cent of the world’s gold has been mined since the California Gold Rush.

Gold is often alloyed with other metals to change its colour and strength. Eighteen karat gold is composed of 750 parts of pure gold per 1,000.

The largest gold coin ever created was cast by the Perth Mint in 2012. Weighing one tonne and measuring 80 cm in diameter, it surpassed the previous record, a 2007, C$1 million coin which was just 53 cm across.

One ounce of gold can be stretched to a length of 50 miles; the resulting wire would be just five microns wide.

The largest ever true gold nugget weighed 2316 troy ounces when found at Moliagul in Australia in 1869. It was called the “Welcome Stranger”.

The atomic number of gold is 79, which means there are 79 protons in the nucleus of every atom.

A “London Good Delivery Bar”, the standard unit of traded gold, is made from 400 troy ounces of gold.

There are 147.3 million ounces – around 4,600 tonnes – of gold stored in the US Bullion Depository at Fort Knox.

Even at only 10 parts of gold per quadrillion, the world’s oceans are estimated to hold up to 15,000 tonnes of gold.