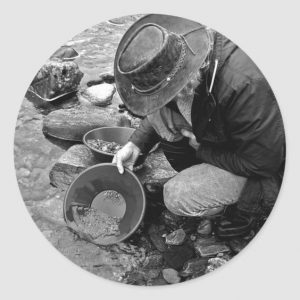 How was gold mined in the past? We might have learned about this by reading Jack London books, we watched westerns, adventure movies and we saw that gold was sifted in the wind or washed in the river. And in fact, it was very easy to mine gold. People didn’t need special skills or sophisticated machines to get particles of the precious metal. It was not necessary. Gold lay on the surface, and besides, it has a high density of 19.28 g/cm³, while sand has only 2.2-2.7 g/cm³. Therefore, gold is very easy to separate from sand particles.
The word “gold” comes from Old English, which in turn comes from the Germanic word “gulþa”. The most ancient article of gold, dated 4600 BC, was found in Bulgaria. Based on this discovery, scientists have proved that the processing of this metal began about 6500 years ago. And it just confirms the fact that mankind has been familiar with gold for thousands of years. This rare and expensive metal was-a currency, in modern parlance, and was used as currency.

In the life of ancient peoples, the metal played an important role. It was compared to the sun and unlimited power in Egypt. Different currencies came and went, but gold always remained reliable and stable. Already in those ancient times people understood the importance and value of this metal.

More and more people wished to own the treasure. It was the time of gold fever. Gold excited and beckoned, and people went in search of it and found it. So in 1471 gold was found in Ghana, Mexico, Chile, Peru and Brazil. In 1745-in the Urals. Later in 1823 in Canada and the United States and in 1851 gold was struck in Australia. Later in China and South Africa.
In all times gold has been the driving force behind progress and a new era. The present-day monetary system in the world is based on this precious metal. Gold is one of the most universal systems of accumulation and payment system now.