Who wore the golden pectoral of Monte Albán? 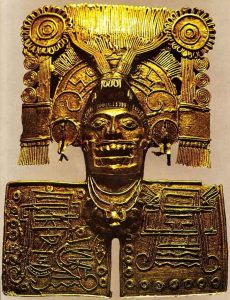 This Mixtec masterpiece was one of more than 120 gold artifacts discovered in a tomb in southern Mexico. Its complex iconography has led to heated debate over the identity of its owner.

This stunning pectoral, worn around the neck by a Mixtec dignitary, was one of more than 120 gold pieces found in a tomb in southern Mexico’s ancient city of Monte Albán.

A stunning golden pectoral, designed to be worn around the neck of a Mixtec dignitary, was one of over 120 gold pieces found in a tomb in southern Mexico’s ancient city of Monte Albán. Rich in symbolism and iconography, the figure’s visual complexity has led to several different interpretations of its meaning and the identity of its subject.

The rich pre-Columbian past of Mexico’s state of Oaxaca was largely hidden until archaeologist Alfonso Caso began his work there in 1930. Focusing on the ancient mountaintop city of Monte Albán, Caso determined that the site had served as the capital of the Zapotec empire for more than 1,000 years, but by the year 700 it had fallen into decline.

The Zapotec abandoned the city, and their successors, the Mixtec, came to power by 900. They would rule until 1521, after which date the Spanish extended their conquest of the region.

During their occupation, the Mixtec reused Monte Albán’s Zapotec structures, including royal tombs. Caso uncovered 20 buildings and 176 tombs at the site. In 1932, after tunneling through a wall of an elite residence, he discovered Tomb 7, considered by many to be the most spectacular find ever made in Mesoamerica.

The tomb dates to about 1330. It contained more than 500 objects, including more than 120 gold ornaments, whose craftsmanship revealed the Mixtec as the most skilled goldsmiths of central and southern Mexico. They excelled in “lost-wax” casting, producing ornamental objects such as pectorals (chest ornaments hung from the neck), pendants, necklaces, and other items.

One of his most stunning finds was a formidable golden pectoral, which Caso described as “[p]erhaps the most beautiful Mexican gold figure we know of.” Dazzling to behold, the pectoral also contains important information about Mixtec culture and the complex symbolic language in their art.