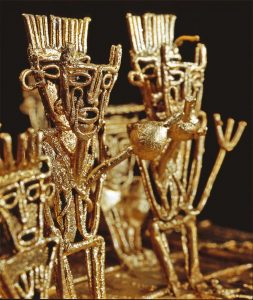 El Dorado is the lost city of gold or the mysterious South American country rich in countless treasures. El Hombre Dorado or El Rey Dorado-so, in Spain, the people called the mystic chief of the tribe of the natives, which means “The Golden One”. The reign of the new tribal leader began at Lake Guatavita. According to one legend, the new chief, during the ceremony, was covered with gold dust, and to appease the gods who lived in the lake, the natives threw gold jewellery into the water. In the 15th century, the mysterious town and its subjects were conquered by other tribes and the Gilded Ceremony ended.

The eternal tale of a place hiding untold riches was born in the 16th and 17th centuries, when Spanish explorers reached South America. In an unsuccessful search for Eldorado, the conquistadors forged new paths deep into the mainland. Stories about the Golden City vary widely, but there is some truth in them all.

Eldorado was never found. Legend has it that the Spaniards found only a mysterious lake and tried to drain it in 1545. Many gems and precious objects of gold were found around the edges, but the main part of the supposed treasure remained hidden under the water and remained inaccessible.